EEDURO stands for the EEROS Education Robotics Platform. The goal of this platform is to create a number of small, low cost, educational robots. All of these robots will run EEROS and are designed as a platform for exploring the EEROS software.

Currently, there are two main robots in development: a delta robot and a seven-axis robot. There is also a mobile robot with a Stanford drive in the early stages of development. The EEDURO platform uses a BeagleBone Black running Linux to control these various robots. 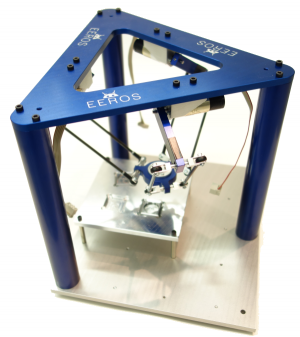 The EEDURO delta robot uses three DC encoder motors to position a manipulator in three dimensional space using a traditional delta robot design. The manipulator is an electromagnet that can pick up small steel tiles and position them within its range of motion (about 10 cm x 10 cm x 5 cm) as well as rotate them. The robot can be controlled using a computer mouse or an Xbox controller via USB.

It also has a basic autonomous mode that sorts the tiles and puts them in their labeled slots. The tiles have impressions of various depths; the software measures these depths to determine where the blocks are currently placed, and then sorts them using a simple algorithm. Currently, the delta robot is the best example of a fully functional robot implementing the EEROS framework.

The seven-axis robot is still in the prototype stage of development, and is not fully functional yet. The current prototype uses DC encoder motors (similar to the Delta robot) to control movement along all seven axes. It uses an electromagnet as a manipulator, like the Delta robot.

This video showcases the Delta and Seven-Axis robots that use the EEDURO platform. The delta robot is fully functioning, as shown in the video, and includes some basic autonomous programs. The Seven-Axis robot is still in the prototype stage of development.