The following examples demonstrate how sequences and their monitors are able to handle various scenarios.

The situation below shows a monitor firing during the runtime of a sequence.

As soon as a monitor checking for a certain condition fires, an exception sequence is called. The exception must always be blocking. However, it would be possible to omit it altogether. After this the control goes back to the original sequence. How does this sequence now continue? Every monitor can be assigned one of the following properties:

The following table shows the behavior for various situations

Sequence Supervised by more than one Monitor

A sequence can be checked by more than one monitor where each monitor checks for a certain condition to be met. While a first monitor could check for a timeout condition a second could supervise whether a payload of a robot didn't get lost. 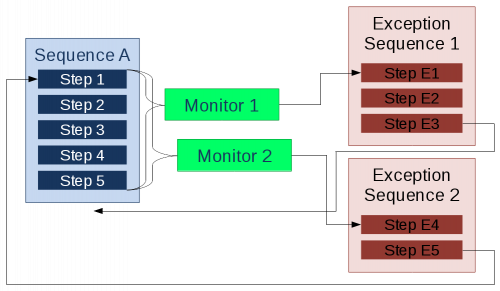 Two monitors checking the same sequence. While monitor 1 causes the sequence to abort, the second restarts the sequence in case of a condition to be met.