A sequencer ensures that a robots can execute a series of user-defined tasks. Such a sequencer runs in non-realtime. The robot's motions are defined as a sequence of steps. The sequencer, which is an integral part of the EEROS framework, has to be assigned such a sequence. Each sequence may include many single steps which must run to completion (unless interrupted by the safety system). Additionally, several subsequences may be defined and added to the same sequencer.

What happens if a certain step in a sequence cannot run due to some condition? In that case an exception might be thrown and a special exception handler has to take necessary steps. This could include repeating some steps or doing something completely different. 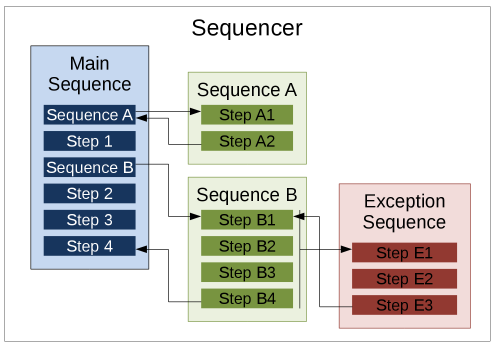 Learn more about how to use the sequencer and how it handles exceptions: